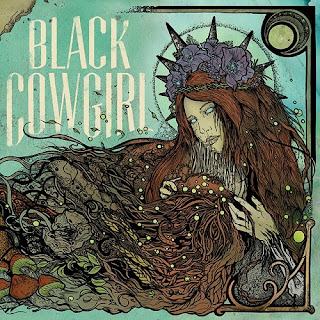 I'd not heard of Black Cowgirl before, so I may be excused to somewhat judge them, at first glance at least, on their artwork. It's got John Dyer Baizley written all over it, so surely I should expect something Baroness like or maybe Kylesa or Darkest Hour? Well as it turns out, no. In fact I'm way off the mark. Don't think sludge or furious metal, think more along the lines of rock with an infusion of technical riffage. But good technical riffs, riffs that still retain their groove. Not like Dragonforce shredding where it just sounds like someone attacking a guitar with an electric whisk. No no, these fellas have managed to not just retain that essence of soul that seeps from the strings but also give it a touch of Scandinavian style to boot. I know some of you will read that with a confused look and raised eyebrow, so if you're not familiar with them already, just hit up iTunes and check out some early In Flames or Amorphis. They're not by any means stealing anyones sound, but they do share that slight echoey and haunting sound scape structure, albeit nice a subtly. If thats not the sort of genre that really floats your boat then don't worry because the bulk of the two EP's sort of straddles the line between typical hard rock and desert rock, with the latter having a slight Gary Acre (Yawning Man) kind of feel.
The record itself is actually the combination of two EP's. Last years debut spanning side A (or tracks 1-6, for all you digitalists) and the new material recorded this year on side B. To be honest, they could really have just passed it off as a whole album as despite being recorded a year apart the transition is pretty seamless. That mite not sound like much of a big deal to most but anyone out there who is in a band and has either re-recorded old material or split a recording over a long period of time will know just how tricky this is to pull off. That technical expertise does really shine through in both the old and new recordings. If thats not good enough for you though you mite be interested to know that they're also due to embark on a small west coast tour at the end of the month with my friends Jess and Neil and their act The Company Band, so if you happen to be in Philly, NY or DC then I urge you check them out.
The album will be available on cd from the end of the month via the bands Big Cartel site, the vinyl however, well you're gonna have to wait until August for that little beauty. But keep checking Kozmik Artifactz for updates on when exactly you can get your mitts on it.