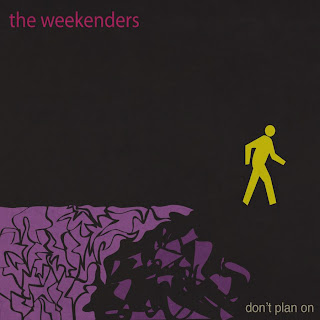 Damn, we're getting quite a reputation in Utah. Thats right ladies and gents, more lovely goodness for your ear holes straight from Salt Lake City!
A little different from what we've received in the past the home of Mormon's. This time we're going retro. Really retro. Think, the days when Page and Plant reigned supreme, Leslie West was the size of a mountain and Grand Funk still had... well, funk. The Weekenders really manage to capture that early 70's vibe down to every single note. Vocal tone, reverb, echo and that distinct and that occasional classic organ harmonic are so spot on that you'd swear one if them must have a flux capacitor stashed away somewhere. But they're not without they're own modern touch. Much like Jack White's latest work that echos a bygone era, everything is bathed in a distinct homage to the classics but there are little tell tail signs that give it away. Slight tweeks and nuances within the riffs of Alone and Don't Plan On serve as subtle gestures that the guys grew up throughout the 80's and 90's. There are even a few hits at a little post rock influence in there too, most notably in the final track Penn Station. It's quite a little mix for sure, but ultimately it still remains the classic rock enthusiasts wet dream. Ok, I should really point out that if you're looking for pedal to the metal Wolfmother style riffage and composition you wont really find it here. Yeah there's some incredibly great guitar solos and the vocals are fantastic, but although both have totally mastered the old school genre they are at different ends of the spectrum. But that doesn't matter, think of this as Houses Of The Holy not High Voltage. If like me you're a lover of pretty much anything that rocked the 60's/70's or just plain feel you were born 25 years too late then you're gonna really dig The Weekenders. It's that simple.

Rob's been kind enough to let us give this little belter away, so be sure to hit the guys up on Facebook and give them a like!