From Russia With Doom... 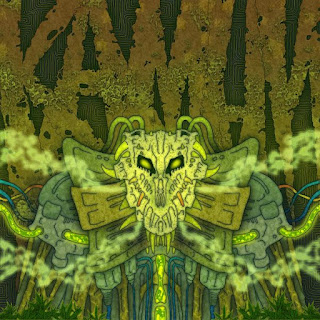 Do you ever wonder what Russians do when they're not drinking vodka, trying to kill James Bond or knocking the shit out of small boarding country? Well much to my amazement it appears they're hitting the bong and creating some awesome stoner doom! Who'd a thunk it?
These guys were first brought to my attention when Robin mentioned them in his blog. Infact I was so impressed that this sort of stuff was coming out of somewhere like Russia it spurred me on to create this very blog you've stumbled upon and share it with as many people as possible.
Formed in early 2010, Kамни (meaning 'Stone' in Russian by the way) got together as a three piece and soon knocked out this 6 track EP. Like most people who have heard it I was instantly blown away. Amazing stoner grooves infused with elements doom and a smattering of occasional spaced out prog all under toning scratchy samples and psyced out vocals. I cant help but think that if Electric Wizard had grown up and got together behind the iron curtain the result would have been somewhat similar.