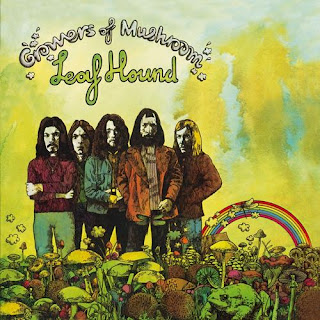 Time for a bit of a flash back to 1971 for this cult classic. A lot, if not most stoner and psychedelic bands over the last 30 years owe a great deal to this record, and for good reason. Recorded in Mayfair, London in November 1970, Leaf Hound put together what would later become a relatively little known, yet hugely influential album.
Rumour has it that there were only about 500 copies of the original pressing (on Decca), a fair amount of which were retained by the band themselves. I cant confirm or deny exactly how accurate that is, but Im entitled to believe it as Ive been in search of this LP for nigh on 8 years and have only ever seen one copy in the flesh. One copy I may add which was firmly clasped in hands looking like what I can only describe as a death grip, and rightly so because despite the 2010 record collectors guide suggesting a price of around £900, Ive seen this album sell for a whopping £3600! Sounding almost like a collaboration between Mountain and Led Zeppelin the entire record oozes with a distinct feeling of dirty psychedelica. A truly great example of British rock from the era. It's just a shame the (original) band only lasted less than a year and didn't produce any more classics. But all's not entirely lost, back in 2004 Peter French re-imagined the band and in 2005 re-recorded Freelance Fiend which was later released as a 7" by Rise Above Records. If this isn't already a part of you're collection, dig it out! Vinyl reissues have been periodically released on Akarma Records and (I think) Repertoire Records.