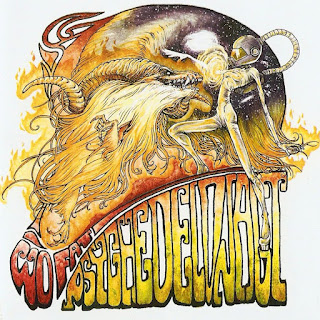 I just had to get this album up, not just because the guys have got a new album out within the next month or so, but because it was easily one of my favourite albums of 2009.
Its the second offering from Texas three piece, following up their first album The Gathering Dark and they've gone from leaps to bounds.
Straight from the get go you can hear elements of all the classic oldschool acid/psychedelic influences from the 70's. The sonic waves of trippy background ambience, catchy pounding riffs all complimented by roaring vocals make this offering (in my opinion) one of the best stoner/psychedelic albums since the days of Captain Beyond, Leaf Hound and such like. A bold statement I know, but if you don't believe me (or even if you do) please, for christ sake check this album out for yourself! Out on Nasoni Records, you'd be mad not to pick it up on vinyl, especially if you're able to hunt down a copy of the beautiful red and green wax version (limited to just 100 copies).
If the forth coming album, Noche del Chupacabra is just half as good as this masterpiece the guys are onto a winner!

For Fans Of; Nebula, Captain Beyond, Dozer, White Hills, Blowback