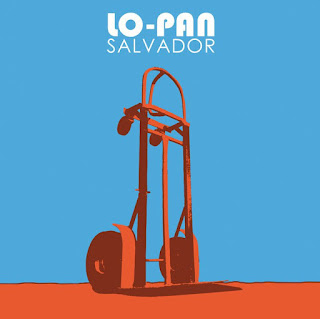 Oh yet another great find! I've had this album playing constantly since I stumbled on it.
From Columbus, Ohio I give you Lo-Pan. Incase you're like me and are wondering where you've heard that name before, I'll save you the hours of brain racking contemplating and frustration... Its the name of the bad guy from Big Trouble In Little China. I could have saved myself all the torment just by looking at their bio, but I was determined to figured it out myself.
Anyway, back on topic...  Salvador, is the bands third studio album (thats not including the remix of the second album Sasquanaut). I totally missed the previous two releases, but on the strength of this little gem I've been hurriedly picking up their back catalog.
Furious pummelling drums, epic riffage and soaring vocals all await in this innocent looking package. Securing itself mainly in a stoner/desert rock style more than anything else, the album still hints at other heavy influences, from classic seventies esque guitar licks and mellowed out verses and break downs to frantic break neck drumming and riffs which ooze a certain eighties Metallica homage. There's a strong feel of precision and really technical aspects within every instrument's contribution but the band still manage to retain an awesome simplicity and groove in every song. Its such a refreshing change over the whole 'speed over quality' approach that a lot of bands have seemed have adopted over the years, often leaving their albums sounding massively over produced, sterile and generally bollocks.
Anyway, Lo-Pan - Great band and an awesome storming release that going to find itself slapped straight in my top 5 of 2011! Go check out the links below for this and the 2nd album Sasquanaut, then head over to iTunes and show your appreciation.
For Fans Of; Kyuss, The Company Band, Venomin James, The Foreign Objects, Ridge
Website • Myspace • iTunes
Sasquanaut (192kbps)
Salvador (192kbps)