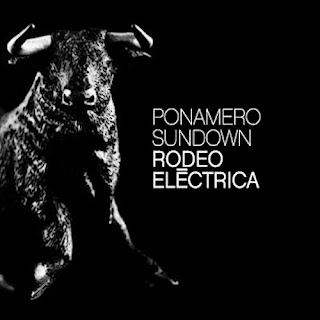 For some reason I just assumed this was another great Spanish band - bull on the cover, accent over the e in Eléctrica... Hey, It was an easy mistake. But these fellas are in fact from icy old Sweden and lets face it, the Swedes know how to put a good stoner/space rock band together. So if you're in search of memorable grooves and more riffs than you can shake stick at then Ponamero Sundown are the band for you.
This, their second full studio album gives an all round more, for want of a better word, 'experimental' sound compared to their cracking first album Stonerized. This time around producing a sort of mix of Red Sparowes esque shoe gaze and early Kyuss style riffage, the clash of styles really does makes for a truly great space rock offering. Although the album opens with frantic drums and churning guitars the mood soon changes into a more ambient spaced out feel. The tempo drops and the vocals distort and echo producing a more somber affair. But worry not, if this isn't really your thing, as the album progresses it snakes in and out of styles and speeds yet still retaining a steady balance of heavy psychedelic rock.
A great follow up to an awesome first album. If you're looking for something a bit mixed you really should check this record out.
For Fans Of; Queens Of The Stone Age, Monster Magnet, Blowback, Top Dead Celebrity, Marulk
Website • Myspace • iTunes
Rodeo Eléctrica (320kbps)