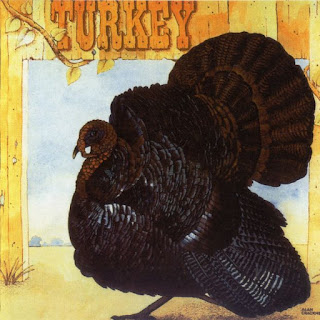 Its been a little while since I dug deep into the dusty old vaults and found y'all something classic and little known. So dig I did and here's a little something for the weekend...
So what happens when you up a leave a band like Jethro Tull?..
Well screw it, you may as well start your own band and thats just what bassist Glenn Cornick did. A risky move when you were a founding member of one of the most influential prog rock bands of all time and leaving at the hight of their work. None the less, in 1971 Wild Turkey was born and wisely straying away from their progressive roots and going down a more bluesy, mellow road.
This was the bands second release, following their first album Battle Hymn. An album which saw them tour heavily around the UK and USA supporting Black Sabbath and reuniting Cornick and Toni Iommi (as Iommi had a brief stint with the Tull). The year between the two recordings saw the departure of both guitarists Jon Blackmore and Alan Lewis but also saw additional keyboards courteously of Steve Gurl and new guy Mick Dyche, leaving the band limping on with just one guitarist. In 1972 the guys recorded and released Turkey, which was to be their final studio album.
The next couple of years following the second album saw the band slowly dismantle and everyone parting ways, until 1974 when Cornick decided to call the whole thing a day. Thats until 1996 when (almost) the original line up got back together and released their first recordings in over 22 years.
Its a little different to what I've put up of recent but if you're liking a bit of old school classic rock give it a listen.
~ Jay
For Fans Of; ZZ Top, Lynard Skynyrd, Grand Funk Railroad, Captain Beyond, Jerry Reed
Website • Myspace
Turkey (320kbps)