Where The Sun Dont Shine... 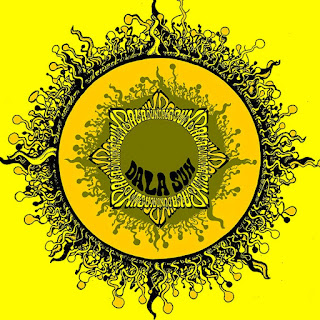 This is another gem I've had knocking around for a while but for some reason or another I'd just not got round to giving it my full attention. Shame on me!
So without much further ado, all the way from Greece I give you Dala Sun. A great trio producing huge waves of what I can only describe at desert doom. Massive fuzzy down tuned guitars cranking out great slow mountains of groove with distant deep vocals bellowed over the top. With flashes of psychedelic and glimmers of classic rock peeking through the fuzz here and there, for me the album really comes into its own when the tempo picks up in the track Fuck It All Away. Picking up the pace and giving you a Dozer-like blast straight to the ears. On the whole the album's as heavy as a two sumo wrestlers in a tank and just shy of really being labeled doom, but with the nicely timed shades of calming ambience and samples it varies the recording perfectly. A truly epic self released piece of work.
These guys are real hard workers, producing and distributing their music entirely off their own backs and even giving this 8 track monster of an album away free! So hit up their myspace and show some gratitude, God knows they deserve it!
~ Jay
For Fans Of; Yawning Man, The Machine, Dozer, Ocean Towers, Lonely Kamel
Myspace