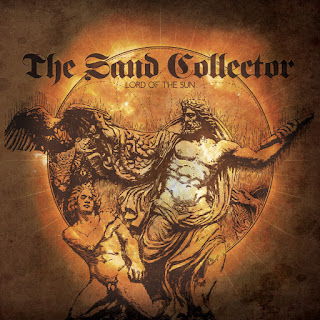 Born from the ashes of a variety of quite established post rock and stoner bands The Sand Collector put an early formation together in 2007. After the brief departure of a couple of the guys the band found themselves carrying on as a three piece, but as fate would have it they finally completed their line up in 2009 after recruiting the vocal talents of Pepe Belda and the guitar wielding of Fernando Ferre.
Ive gotta say, if I was either of the guys that left this band I'ld be kicking myself after hearing this epic debut album. Smashing right out the gates with thick waves of dirty southern rock sounding riffs and gruff vocals the opening track The Chains Of Fear sets a great pace and feel for the rest of the recording. If you didn't know any better you'd swear this was a band from Texas or some other southern US state. Some would maybe use this as a criticism, claiming the band are just attempting to sound American, but I call bull on that. The genre is no longer confined to the likes of New Orleans or such like, as more and more bands from the opposite side of the pond are picking up the style and running with it. If all these attempts had been futile then I maybe inclined to agree with the criticism but Im currently back logged with awaiting reviews for these kinda bands, and The Sand Collector is no exception.
The huge thumping bass and down toned guitars make for an excellent backing to Pepe's gritty voice. The guys simply excel at art of chugging riffs, everything is so tight its hard to believe this is a debut for them.
If you're partial to a bit of Dozer, Red Fang and other bands of a similar ilk then you've gotta check these fellas out!
For Fans Of; Orange Goblin, Masterdon, Dukes Of Nothing, Stonehelm, Dala Sun
Myspace