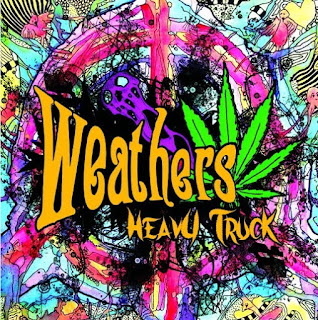 I got hold of this a couple of weeks ago, but having agreed to other commitments its taken me until now to get it up here. Better late than never though eh?
Now you can gather a pretty good idea of what you're in for straight from the cover on this one. Varied bright colours, weed leaf, 'heavy' in the title... C'mon, you know what this all adds up to... Psychedelic stoner rock!
Forming just a couple of years ago back in 2009 they started life as a four piece and at the start of 2010 hit the studio to lay down their first demo. By August guitarist Jim departed and handed over axe wielding duties to vocalist Mike. The new line up then kicked off the new year by hitting the road and touring Greece. Then last month the guys once again headed back to the studio to knock together this little EP. And what a great little EP it is! Hitting just the right balance between stoner, doom, psychedelic and sludge. Theres something in there for everyone. Massive dirty waves of riffs and vocals so tortured they sounds like they're escaping from hell itself. Think of a mash of Sourvein's vocals and Dopefights epic winding sludgey tunes... Its a nice thought isn't it? Well this is the sort of thing you're in for.
The guys are soon to be putting into action plans for a full length album, so watch this space!
For Fans Of; Kamni, Cult of Luna, Weedeater, Dopefight, Truckfighters
Myspace
Heavy Truck (320kbps)