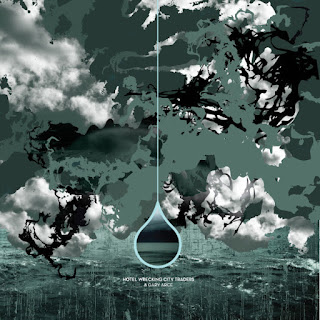 I honestly can't believe just how many bands have contacted us from Australia. In the last week alone Ive had no less than 6, I swear they're slowly monopolising this blog one post at a time. None the less Im desperately trying to keep up with the demand and get the reviews out there so guys can check out these great bands.
So here's the latest gem Ive received, courtesy of Hotel Wrecking City Traders and no other than Gary Arce of Yawning Man himself.
Now when, as a relatively small band you luck out and get to collaborate with another artist its pretty exciting. But when you land someone like Gary Arce - a guy who's played such a massively vital part of the Californian desert rock scene for well over 20 years... You've gotta be just a little bit happy with yourself. Right? Well, they are and with just cause because this is a bit of a monster of an album. Wave after wave of mammoth pysch guitars crash down with that same eerie tone of Yawning Man. Not to the point where you could easily confuse the two, but just enough for Arce to make his presence known without taking away any of the sound and drive that HWCT have established over the last 4 or so years. With such a talent and power house like that joining you too, thats no mean feat. Its really one of the best collaborations I've heard in years. The album itself is just spanned across two 10+ minute tracks, for some this will drag a little understandably, but every now and again theres a little hook that will catch you and stick in your head for the rest of the day. Its a great piece of work and I would love to hear a follow up, especially if the trio got a little more experimental. God knows they've proved the talents there for it. At the end of the day if you're looking for something more on the stoner side of the desert scene then this wont really quench your thirst. But, and this is a big but, if spaced out jams and ambient fuzz is more up you're street then you with adore this album. Its truly one for the early desert rock enthusiast, and if you're a vinyl nut too boot you'll be happy to know its going to be coming out in a limited pressing of 300 on lovely 180g blue wax when its released on June 27th through Brofidelity Records.
Check the link below for a teaser of the new record.
~ Jay
For Fans Of; Yawning Man, God Speed You! Black Emperor, Grails, Red Sparowes, The :Egocentrics
Myspace • Facebook • Bandcamp