On The Bright Side... 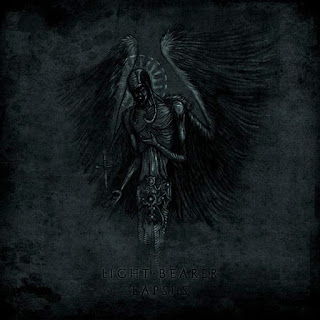 My review of this record is bound to be somewhat biased, sadly. Figures – my first review for this esteemed blog and I blow my independence straight off the bat. Anyway, Light Bearer are formed from the ashes of the awesome Fall of Efrafa, whose Warren of Snares trilogy is one of the best things to have happened to post-metal in the last few years. I fully intend to review it properly if I can find someone to give me a copy of the vinyl set...
Anyway, where Fall of Efrafa focused on political movements, religion, intolerance and Watership Down (no joke!) across their records, Light Bearer are driving down a far more straight and narrow discussion of religion and the concept of creation of myth and religion from an atheist or antitheist perspective, referencing Milton, Dante and Philip Pullman along the way. Musically, the band channel the spirit of FoE, Cult of Luna, Pelican and Isis magnificently, creating a sound of surprising scale. Doomy riffs compete with stunning atmospherics, beautiful post rock touches, and Alex’s startling roar. The progression is king here, with songs built around stunningly simple and singular chord progressions that are built with layers of noise to create soundscapes that never feel crowded. Other nice touches are present; pianos are used, and the addition of a lovely Cello line to ‘Primum Movens’ adds a further level of depth. Songs are allowed the space to develop – in particular, the epic ‘Armoury Choir’ passes through several movements, building to a crushing climactic section. Atmospheric touches are ever present, with ‘The Metatron’ beginning with chanted vocals over a keyboard drone, and periodic drops to keyboards in ‘Primum movens’.
It’s a great record. If Pink Floyd had been bought up on Cult of Luna, Electric Wizard and Converge, this is what ‘Dark Side of the Moon’ would have sounded like. The best bit? This is part one of four, so Light Bearer will be with us for some time. They’re hitting the road again in September, I believe, go check them out.

For Fans Of; Crippled Black Phoenix, Red Sparowes, Cult Of Luna, Windmills In The Ocean, Taiga