Soundtrack To The End Of The World... 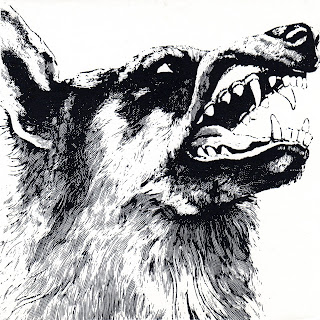 I had heard the name Crippled Black Phoenix a few times over the last 3 years or so but the penny never really dropped and it wasn't until relatively recently that I actually picked up any of their material. I was in New York last year perusing the vinyl shelves of Generation Records when I noticed the cover. It looked familiar, so without so much as checking who it was I tucked it under my arm and carried on searching... One of my best spur of the moment purchases ever! But lets back track a little...
In 2004 Justin, drummer from Iron Monkey and until most recently Electric Wizard began laying down recordings that had been running through his head for a while. These recordings, spurred on by Mogwai's Dominic Aitchison later went on to form the foundations of whats now described as post rock super group - Crippled Black Phoenix.
They had a bit of an unorthodox beginning, with most of the plethora of members having various other commitments and tours with other bands progress was slow. By the way, when I say plethora Im not exaggerating, CBP have had no less than 28 members. Thats quite a feat in itself.
I will announce now, that if you're expecting a similar sound and style to Dukes Of Nothing, Murder One, Acrimony or other Iron Monkey related acts then you'll be in for a bit of a shock. Expect soulful, somber and moving ballads often pushing the 10 min mark. But for those of you possibly doubting keep an open mind because this band is genuinely epic and this album is there best work to date. The opening track 'Troublemaker' has become one of my favourite songs of the last few years.
With the vast array of members at anyone time, use of victorian style and unusual instruments coupled with the choice of peculiar venues, witnessing this band do their thing it honestly an experience to behold. However, it also poses a slight problem with fitting the band into any one genre. To date I've heard them referred to as; prog rock, stoner prog, doom, folk doom, freak folk, ambient folk, end-time rock, shoe-gaze, orchestral rock, space rock and even emo. I must admit, on hearing the latter I very nearly swung for the person who described them as such. Either way it would be wrong to pigeon hole this outfit. The precessional use of each instrument unusual or not, adds such levels and depths not really seen on this scale since the likes of Pink Floyd's heyday. This album is really a great testament to the great talent and expertise of each and every member. What ever you're preference of music you all should seriously consider picking this gem up. Especially if you're able to dig it out on vinyl, notably the limited edition of 250 white vinyl.
Oh, and if you're lucky enough to spot these guys playing live near you, good god buy a ticket and get you're ass down to the show!