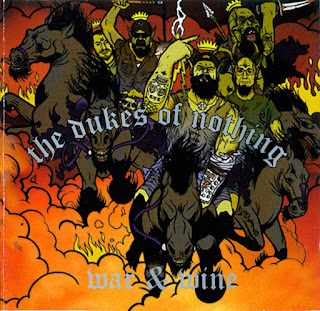 Now the question you have to ask yourself is - Am I ready for some whiskey fuelled, balls to the wall rock n' roll? If the answer is no, then its probably best that you jog on now. However if you chock full of testicular fortitude and actually have a brain in your skull then here's Dukes Of Nothing.
Not too long after Iron Monkey broke up bassist Doug, guitarists Stu and Dean (also of Acrimony) coupled with Orange Goblin drummer Chris Turner hurriedly put this motley crew together. Joined and fronted by GQ style writer, newest Turbonegro vocalist and general class act punk and connoisseur Tony Sylvester the band was unfortunately relatively short lived. But this always somewhat seemed to be on the cards for the heavy metal quintet. Never really interested in making it big the guy's modus operandi was always to just play for their own amusement and see if anyone liked it. I can even recall Tony's words to me on his vision for the future of the band; "We want to play a few shows - release a seven inch - play with Wino then retire." Well, two out of three was definitely still a victory if you ask me.
The shows were where Dukes of Nothing really came into their own. Fuelled predominantly on booze these guys were absolutely thunderous live. I was lucky enough to catch them quite a few times, the most memorable performance of which was in a small club in the midlands. The atmosphere was electric, ear bleedingly loud and the crowd were lapping it up... Right up until, if I remember correctly, the plug was pulled because the ceiling below the gig was beginning to crack... To be honest though I'm really surprised this didn't happen at every show.
Spending most of their time touring with various other projects they only got around to producing just this one studio album and contributing to a couple of seven inches. None the less War and Wine is still utterly blinding and a true hidden gem and widely overlooked classic debut/swan song. It may only be about 22 minutes long but it's a fast, dirty and ruthless fusion of awesome punk and southern rock. So then, what else could you possibly ask for?
~ Jay

Email ThisBlogThis!Share to TwitterShare to FacebookShare to Pinterest
Labels: Dukes Of Nothing, Metal, Stoner, UK