Ruined By Idiots - A Tribute... 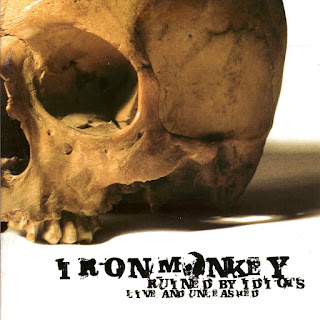 Its been 9 years almost to the day since the legend Johnny Morrow's untimely death. So as a tribute to this unsung icon all the reviews this week will be related to the man himself and his fellow band members post Iron Monkey projects.


Geez, so where do I start?...
John Paul Morrow... Well the first time I met Johnny was at the first Iron Monkey gig I ever went to, at, if I recall rightly The Old Angel in Nottingham, UK. I was a mere teen at the time and all I can recall from the show was being battered into a pulp by flying bodies in the pit, smashed instruments and the back drop... That infamous back drop - the thing of now local metal band legend. It looked to be what I can only describe as an old bed sheet scrawled with 'Iron Monkey' in what seemed to be black paint but could have easily have passed for faeces. Like some sort of souvenir from a prison riot or dirty protest. It was one of the first gigs Ild ever been to, and in a way that kind of makes me sad. Solely because very few shows I've been to since have managed to match it in atmosphere, aggression and shear ear bleeding volume. But anyone who actually got to see Iron Monkey live knows all to well this wasn't a one off. The band oozed a raw brutal energy in every sense possible, weather it was live performances or during interviews. They played what they wanted, how they wanted and never gave two shits about the media or press attention seeking. One of the best examples of this was during a show in Brighton where one audience member decided to pitch bottles and abuse at the band during their set. As the story goes, he later attempted to sue the band after a monitor was dropped squarely on his face through a fog of flour, a bag of which Johnny had stolen from the venues kitchen and hurled into the crowd mid set. But for me their pièce de résistance came in 1999 when having scored a ride to Holland on Metallica's tour bus. The guys promptly laid waste to every drop of booze in sight, beat each other with a kettle full of boiling water and attempted to punch Dean out of the emergency exit while traveling at 60+ mph. All in all causing over £400 of damage. This was typical Iron Monkey - pure unadulterated carnage, on and off the stage. But unlike most other bands they were down to earth with it. Wether it was a result of individual upbringing or the fact the band had been messed around and screwed over more times than I've had hot dinners, I don't know. But over the years Doug has got me out of a fair few scrapes and scuffles and still to this day Johnny remains one of the nicest, most genuine guys I've ever been lucky enough to meet. Giving myself and many other people I know regular tips and suggestions for new and obscure bands was one of his many personal accolades. Just a couple of weeks ago fellow writer Andy was reminiscing about browsing a record store in Nottingham back in the day and how Johnny had got him to into Church Of Misery. I'm quite adamant that because of Johnny's absence over the last few years my potential recorded collection has a severe deficit.
But the Monkey weren't just local legends and by no means was their music secluded to this side of the pond. As rumour has it Phil Anselmo's infamous 1996 overdose took place while listening to the bands first album. Quite a notable rock and roll claim to fame I'm sure you'll agree. So it's not in the slightest bit surprising that the guys were held in such high respect by many other NOLA originating bands and acts, most notably Eyehategod who flew over to headline the great man's tribute shows 'Morrowfest' in 2002. Even over a decade later its clearly obvious that the memory of the band is still weights heavy on the guys. Just late last year I went to see Eyehategod in my home town, and midway through their set they kicked straight into 'Bad Year' with a furious conviction. A honest and fitting tribute to one of, if not the best metal bands ever to originate from these shores.

I dont think there's much need in describing in great detail the bands sound. If you don't know by now then shame on you, but if you have been under a rock all this time then this is the perfect way to get acquainted. A great mix of intense live recordings, rare studio tracks and great covers.

For Fans Of; Eyehategod, Buzz•oven, Carcass, Church Of Misery, Coffins


Having received an rather nice email from former Monkey and Electric Wizard drummer Justin Greaves here's an recently unearthed video of some early Iron Monkey live in Wolverhampton, UK courtesy of the man himself... Enjoy.