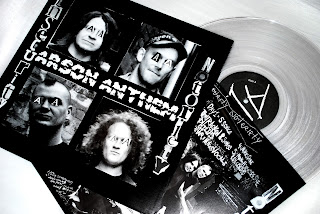 Took me a while to actually get my hands on this, but a few months back my buddy Rich managed to get a few imported over for his store. What a gent.
Anyway, I will keep this short and sweet as I am inundated with reviews to write and most of you will already be aware of this latest of super groups and may well have a good idea of what to expect - C'mon, Mike Williams, Hank III and Phil Anselmo... You've gotta have a pretty good idea of whats gonna happen here.
I must confess I wasn't massively impressed with the first EP but fortunately they stepped it up a gear for this outing and it does seem to bear more elements of each members individual stylings and nuances. Something which no doubt everyone would be expecting. A bit like Superjoint Ritual fused with Eyehategod. But thats probably stating the obvious. What you may not expect is the heavy punk aspect. Yeah, Eyehategod's history is steeped in punk overtones but given the pace they play at it isn't always immediately apparent. But with Arson Anthem's upped tempo its easy to recognise influences such as Discharge and Black Flag, plus with the song durations rarely exceeding the 2 minute mark you can even pinpoint a certain grindcore aspect. Think of a purely analogue Agoraphobic Nosebleed... Pretty cool eh?
If you haven't already go have a wonder over to Phil's own record label The Housecore Records, who have snapped up the majority of NOLA's bands, which proves to be quite a fine lineup...