Heavier Than A Death In The Family... 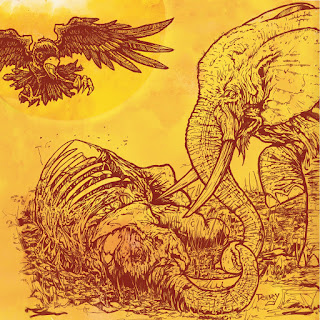 Damn this is one hell of a crushing album! Just picture a cross between Baroness's Red Album and High On Fire's Death Is This Communion and you'll be beginning to realise what you'll be expecting when you listen to Raise The Red Lantern. They've got that big fat pulverising neanderthal like tone that spews wave after wave of furious lead breaks and storming choruses right down on top of you. Anyone who's seen the likes of The Sword or Doomriders live will know exactly what I'm getting at. Like pure unadulterated groove filled relentless carnage.
But its not all thrash and no trousers. Sure the guys can crank out some awesome guitar solos but they don't, like so many other bands, take it that step too far and labour the point. Where so many acts just plough through and just seem to try and play as fast as possible for as long as possible (and inevitably bore the arse of you) RTRL get straight to the point. There's techy riffs left right and centre but they manage to keep them punchy and well balanced. They're not a blink and you'll miss it affair, but they're also not a "jesus, this solo's been going on for 5 minutes!" kinda deal. That pleases me not end.
I really can't help but feel labels such as Relapse or Southern Lord really dropped the ball somewhere down the like by not signing these guys. Even if it was just to press this one record. Nonetheless, it's angry, it's fast and it's chock full of groove. Go get it!

Oh, and be sure to also check out Seventh Rule Records, as these chaps are backing some other great bands.