Back Behind The Barrels... 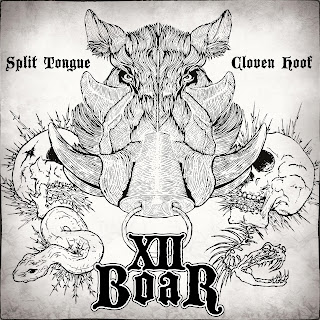 Oh we love these guys and their very own style of classic heavy metal and crunching stoner groove. They tread that fine line of being ultimately unique yet able to adequately convey who their influences are through their sound without stepping on any toes. Thats pretty hard to do without planting yourself firmly within that cliché metal niche that usually results in bands trying too hard to be the next Pantera or such like. Very little really grates on me more to be honest. But XII Boar have nicely dodged that bullet from day one. Their 2011 full length album 'XII' was storming behemoth of a debut by anyones standards and thankfully they've returned with another contribution in the form of this 4 track EP Split Tongue, Cloven Hoof.
So have they kept that edge and ferocity of the previous offering? Well... No. Truth be told, they've only gone one better and stepped it up a gear. I swear, press play and this EP bolts straight out the gates and just hoof's you square in the balls. The opening drum beat and riff combination of track 1, Smokin' Bones has got to be one of the best set openers I've heard since Dopefight's Nob.Nod.Noi and nothing lets up from then on. It maybe less than 20 minutes long but what the EP lacks for in length it more than makes up for in enthusiasm and shear dirty grooves. The whole thing is bathed in an such an eclectic range of tones - quintessential elements of metal, southern, heavy, classic and stoner rock, hardcore and even blues. But amazingly it does all this without becoming even in the slightest bit disjointed and muddled. I'd love to think if Clutch came from New Orleans and turned their hand to metal this is what they'd sound like.
With twice as much energy as a toddler jacked up on Red Bull and with more blistering fret work than Kirk Windstein on pcp this one hell of a follow up release. If these boys can drop a full length studio album with the same formula I think the Great British stoner metal scene is gonna received one hell of a kick up the arse. Orange Goblin are going to be have to keep looking over the shoulder from now on...