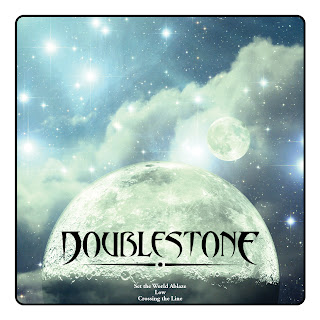 Nothing beats a little Scandinavian heavy rock and roll right? Damn right! So much kudos to Bo for hitting me up with his band Doublestone.
The guys got together in 2011 originally in the form of a two piece grunge band, setting out to explore the simple catchy sounds of the 90's most iconic genre. After their first release 'Really...' a pure grunge 7” the band decided to turn their style round some what. The sounds got heavier, tracks longer and the focus shifted to the early days of heavy metal. Now a trio, Doublestone are currently in the process of finishing off their first full length studio album, which should be with us in the very near future. So for the time being  check out the EP and get a taste of whats to come... That being a Danish rock trio it's obviously nothing short of classic 70's style whaling riffage and evocative vocals. It's all the definitive stoner elements and nuances with a certain Scandinavian twang to them. It's hard to put your finger on exactly whats different, but it's a little like Amorphis playing Kyuss songs. Fantastic guitar licks all with an slightly echoey tone which just falls perfectly shy of being classed 'fantasy metal' (thank god!).
It's such a great little EP, and rest assured that as soon as the full album's done and dusted we'll be slinging it your way... Can't wait!


For Fans Of; Graveyard, Black Sabbath, Wo Fat, Sungrazer, Danzig