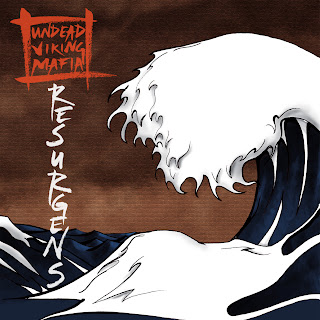 Call me shallow but if you've got an awesome name for you're band then rest assured you're gonna get my attention. It's only natural surely? So when it came to Atlanta four piece Undead Viking Mafia, I may well have just gone and shouted out load "Holy fuck thats an awesome name for a band!"... Hell, thats an awesome name for just about anything, just imagine going up against a football team called that! God, I'm jealous that I didn't come up with it.
So fine, I hear you say. They've got a cool name but are they all really all that? Well 'yes they are' answers that question. With a quintessential southern rock twang, hardcore vocals and smattering of 80's punk influence immediately evident, the whole album is kinda bathed in a pretty eclectic taste of genres. Just listening to the first track of the album you'll be able to pin point guitar licks similar to that of Zakk Wilde and Deron Miller (cKy), drumming akin to early Chris Lombardo and vocals that seamlessly flow between that like Ben Falgoust (Soilent Green) and Henry Rollins. Not to put too finer point on it, its pretty bloody astounding. I've not heard anything this varied and yet so tight in a long long time.
You've gotta hear these guys. No matter what your preferred genre maybe I can pretty much guarantee that you're gonna love em'.


For Fans Of; Maylene & The Sons Of Disaster, Unsane, Hatebreed, Suicidal Tendencies, Refused