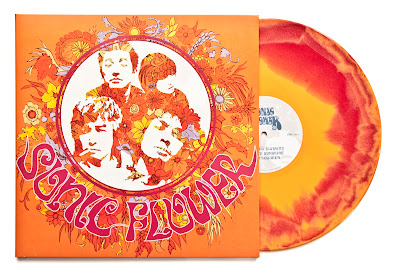 Back in about August/September of last year I got wind that after 8 years the powers that be were going to reissue Sonic Flower's classic instrumental one and only album. Now this little secret came to me from the same source that gave me the tip off of the Master of Brutality and Second Coming reissues, so I was pretty confident that the info was spot on. None the less, when the release was officially verified around November time last year by the guys from Church of Misery I was still pretty excited and began to check Emetic's website on a daily basis.
So whats the big deal? Well, truth be told there hasn't been an modern album in the last decade more worthy of being pressed on vinyl, in my opinion at least. Originally released on cd, by the legendary Japanese label Leaf Hound, Sonic Flower was the brain child of Church of Misery's one man talent power house Tatsu Mikami. Fusing together all the very best elements of the classic western heavy rock, psych and southern rock bands of the last 40 or so years, what the album lacks in the form of vocals more than makes up for in the form of biblical guitar lead breaks and fuzzy foot stomping riffs. Like a homage to the likes of Band of Gypsys, Mountain and Captain Beyond, this little record is nothing short of bloody amazing. More to the point it's most likely one of the greatest stoner albums to be made in the last ten years and more than worthy of being played through a smoke filled haze between the likes of Electric Ladyland and Growers of Mushroom. That may sound a little bold, but trust me on this... Or don't and go and find out for yourself.
Yeah, actually go do that!