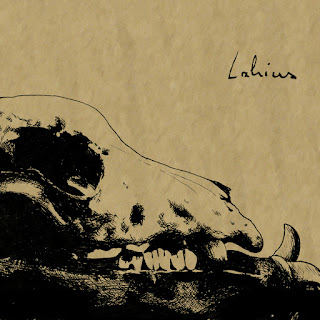 Don’t you just love it when a song builds up from just one guitar until the whole band is bursting with fuzz and awesomeness? Well, I sure as hell do and “Lahius” displays a fine example of that in their opening track “How Much” of their album “st” from Stress Records. Intros like this one always get my heart racing; it makes the song increasingly evolve into the groove as if it was all in a jam session. As for the album in its entirety, it’s top of the line stoner rock, with up-beat and aggressive desert rock tracks; but interestingly enough, the band also approaches a stoner doom style with the second song m, “Bluesness” and its slow and spectacularly chugging riffs. Although, these guys do manage to throw in a few notes that just fall short of being in the right blues scale to give it a slight modern doom feel to every song. The vocal style in this album is rough as the singer really is more of a yeller, and occasionally a screamer; it sounds a bit like a mix of Skrogg’s and Superheavygoatass’s lead vocals, brutal yet very enjoyable and uplifting. The combination between the gritty vocals, the extremely fuzzy guitars and heavy bass suits the stoner rock musical style perfectly. Essentially, this album makes me want to grab my guitar and play along until I can’t stand up right, and then play some more.
I am yet to be disappointed by a modern rock band coming from France like these guys, another great example would be The Socks, but I’ll talk about them some other time (fear not, both these bands sing in English). It seems that most rock bands coming from countries other than the US tend to heavily focus their influences on the 60’s and 70’s hard rock we know and love, while most American musicians right now are trying to invent something completely new. Unfortunately, a lot of these new musicians are forgetting what an actual riff is; instead they simply rely on feeble chord progressions. But using old elements like blues scales and riffs in new music is what stoner rock is all about, and I’m proud to see that there are still people out there that have the musical mind-set and ideas of artists past. Long live the riff!
Feel free to check these guys out at their bandcamp page, and download their album available for the total of…whatever you want to pay, even if that means nothing at all. But remember, these guys need to eat, so be generous and give them some money.
~ Bernardo