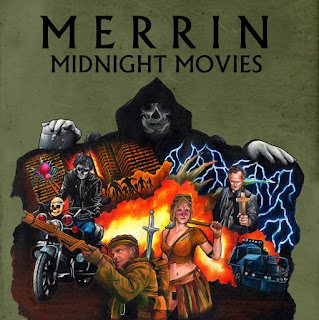 Merrin's love of movies is all over their latest release, from the name of the album (obviously) to the cover art, track titles, and their creation of a horror movie/music video for the opening track, "INT.BASEMENT.NIGHT" (which you can watch below).  Running a line-up of guitars, drums, and synths, the group gives themselves plenty of range in their assembly of moods and styles.  Moving easily from deep-cave doom to nigh-proggy rock ("De Palma"), slow-cooked stoner rock ("The Tenderiser"), and other approaches, Merrin show off their riff power on a number of fronts, though things are generally fairly heavy.
Even while instrumental, the sense of purpose with which the band moves through their songs lends things a concept album air (and the titles don't hurt at all in that regard).  Add to that the smooth momentum the band keeps going through all of these changes, and it's like a slow-turning kaleidoscope for your ears.
Trying to come up with comparisons for the group is a tough order, as they've quite thoroughly got their own thing going on this album.  The few that I was able to come up with that felt like comparable fits, I found, were bands which had also played around with the idea of their albums serving as soundtracks to unmade movies, or at least had that same cinematic scope of ambition and broad-spanning unity to their song-writing.  It's an album with levels of depth that'll easily swallow you if you're not careful, though that should come as a welcome experience.  Impressive through and through, be sure to check this one out for yourself.
~ Gabriel

For Fans Of;    Broughton's Rules, The Dunwich Orchestra, Have A Nice Life, Merlin, Pale World