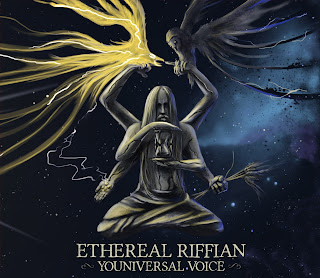 With a string of releases under their belt since starting up in 2010, the Ukrainian group of Ethereal Riffian have put together a respectably-sized catalog of tunes by this point.  That repertoire gets a nice exploration in this live album, which joins together tracks from the group's earlier albums (including all of Aeonian) with a couple of new songs.  As you might guess from the names and artwork, there's a large dose of psychedelia to the material, with Eastern modes, didgeridoo, chanting, and other fixtures of the quest for expanded consciousness getting melded to heavy bass, thick riffs, and other stoner doom staples.
The band also gets a nicely fluid momentum going with the songs, something fairly rare among the live metal albums I've heard, with a neat stream-of-consciousness unrolling taking effect as the tight chords and sprawling feedback come together.  The musicians put in some excellent performances along the way, clearly invested in playing the songs as effectively as they can, and the emotional projection from that work adds something special to the experience.
How easily you'll get caught up in the blitz of melodies and thunderous crescendos is up to your preference for that sort of thing, of course, but the skills put on display by Ethereal Riffian within the songs of this release are hard to deny, whatever your tastes may be.  From the gradual warm-up of the intro to the last echoes of the final track, Ethereal Riffian play their asses off to deliver a well-made album, with little to none of the slacking off that bands commonly find excuses to do when assembling a live album.  If you haven't heard this group's work before, it makes for an excellent jumping-in point, and fans of previous releases should be thrilled to hear the lush treatments in spontaneity received by the songs in a live context.
~ Gabriel