Songs From The Ruins... 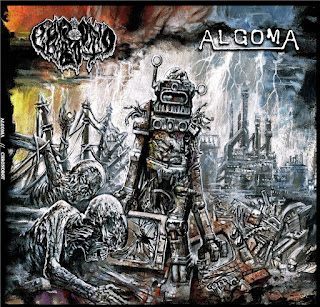 When we last heard from Chronobot, it was on their split with Hemptress, released by Sunmask Records.  Now they're back with another double-Canadian split, this time served up by Dead Beat Media, and their partner in crime this time is the sludge-dealing group of AlgomA.
AlgomA take the A-side (naturally), starting off with "Phthisis", a filthy-sounding, high-bass rager with a big chunky riff to get lodged in your brain, along with bubbling strains of feedback.  Then it's "Electric Fence", a track with a dystopian setting to match the cover art, with internment camps and betrayal fueled by starvation lending things a harsh grime of despair to go with the electrified sizzle of the chords.
Over on Chronobot's side, some of that sludgy residue remains, but things are shifted to more of a stoner doom stance, with broad bass riffs, plodding beats, and shots of melodic lead guitar to liven up the proceedings.  Stretches of instrumental grooving characterize their first track, "Red Nails", before they tumble on into "Jerry Can", a gear closer to the harshness of AlgomA's tunes, with another strong riff leading the listener through the track.  Lastly, "Sons of Sabbath" pays homage to the great ones, bringing things to a close with a fast-running stony jam.
Between the two bands, there's a nice range of heaviness covered, and both put on good shows, making this a solid introduction for those new to either group.  It's also a nice reminder that Canada's high-quality metal is hardly limited to the tech-death that seems to overshadow its exports, so in short, snag this one up if you're in the mood for some low-tuned metal to make you feel dirty.
~ Gabriel