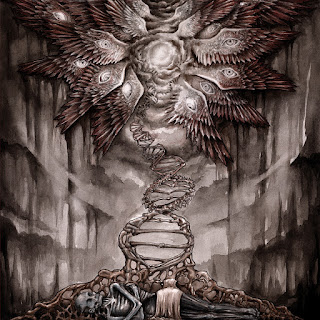 Palace of Worms' first album since 2010's Lifting the Veil (though a couple of splits were released in the interim, including one with Mastery, who guests on a couple tracks here) finds the one-man band drawing influences from a wider range, with death and doom joining the black metal base, while atmospheric touches of neofolk, symphonic metal, and more add further layers of complex moodiness.
Deep and haunting riffs meld well with the more savage outbursts of violent shredding, the drums are applied strongly to both moroseness and madness (with the complexity they get to show in the slower sections kind of stealing the faster sections' thunder), and while the timbre of the vocals doesn't change that often over the seven tracks of the album, it's worked into the compositions in forms that allow it to rage and wail in diverse ways.  Some carefully-rationed use of backing vocals helps lend a bit of extra suffering and majesty to the proceedings at points, while slow-paced bridges amplify the sense of desolate longing.
It's a very well-assembled album, and while there is a bit of disjunction from track to track, that kind of helps set each track apart as its own distinct experience.  Vinyl copies can be acquired through Broken Limb Recordings, digital copies through their BandCamp, and the cassette version is available through Acephale Winter Productions and Sentient Ruin Laboratories.  Good stuff, though not the easiest starting point for those new to blackened metal.
~ Gabriel