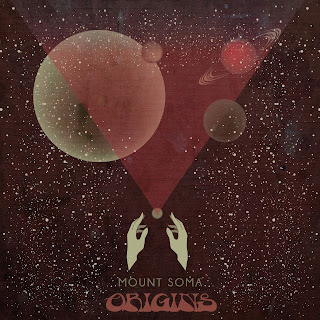 This debut EP from Irish group Mount Soma brings the band to bear with about twenty minutes of stony doom rock divided between three tracks.  Thick tones of reverb, nimble harmonics which get to nearly steal the show in the calmer passages, and drums which work well both restrained and hard-hitting make up the majority of the music, with Clutch-like vocals coming and going as called for by the energy of the songs.
It's not really something to put on when you're in a high-energy mood, but there's a nice sense of care taken with the music from moment to moment, something that should aid the band considerably in future efforts.  And while the group may still be finding their footing, musically speaking, it feels as though they could stand to up their aggression, as too large a percentage of this EP feels as though it's just drifting along.  True, the music is nice during that time, but even when the heaviness swings back into play, it doesn't feel as though there's that much of a destination in mind.
Still, on the whole, the band shows skill and good chemistry with each other, and for a first three songs, things could be a hell of a lot worse.  The down-sides are in hearing how much promise this band has, and being impatient for them to rise to that level and put out a full album, in which their inclination to go for sprawling compositions can really be put to use.
~ Gabriel

For Fans Of;    Ape Skull, Hobo Magic, Lords of Venus, Mares of Diomedes, Oceans of Titan