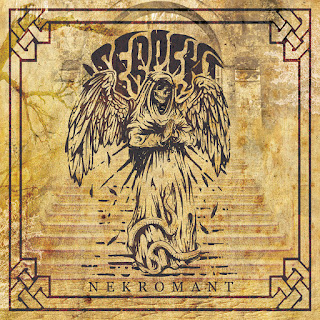 With this second album from the Swedish three-piece of Serpent, they bring some old-school heavy rock to bear, with riffs, rhythms, and chunky melodies driving the bulk of the LP through its nine songs.  Bass, drums, guitar, and vocals come together with a nice chemistry, and the band's attention to putting out smooth tones (with a little rough bite to them for the guitar) really hits that '70s evocation without being too on-the-nose about it.
It really feels like music that should be blasting out of the windows of an El Camino or similar car, peeling down the highway with a back-woods party as its destination.  Generally speaking, it's music that just wants to rock without thinking too hard about why, or getting too heavy in mood.  My personal favorite parts were the times when the band switched to instrumental shredding (as in "Hey You", which you can hear below), as these felt like the sections in which they got to really lose themselves in the music and channel that feeling right back into what they were doing.
All in all, it's an album pretty damn-near perfectly-suited to the hotter months of the year, whether you let it play while chilling with a cold drink, or as the soundtrack to more energetic activities.  Nice tunes, sweet tones, and a lust for grooves that serves them well; it'll be neat to see how the band tops this one.  To get your own copy, you can hit up Serpent's BandCamp, or grab it on vinyl from Transubstans Records.
~ Gabriel