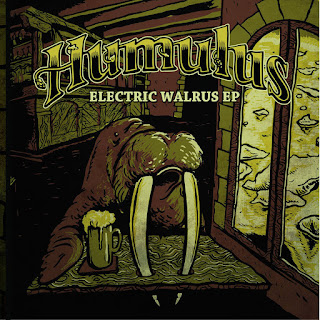 Following up on their self-titled debut album from 2012, the Italian trio of Humulus are back with this three-track EP, fusing spacy psychedelia onto a stoner rock base.  Working from deep grooves, tasty string tones, and a drummer who keeps things rolling and bursts out some wildness when appropriate, the group shows their style with decisive flair, handling heavy and smooth measures without skipping a beat.
While the first track, "Red Star, Winter Orbit" is a big, swirling instrumental piece, "Maud and the Black Moon" brings in smoky vocals that had me in mind of Danzig at first, though that impression shifted more to Joy Division thanks to their integration with the bass.  The singing sticks around into the last track, "Glider", though they make some space for a very fine instrumental bridge to bring elements of the previous two songs together.
Playing with style that goes beyond the call of duty throughout the EP, Humulus have loaded the EP with hooks to catch those who haven't heard their work before.  If you dig stylish heavy rock, desert rock, stoner rock, psych rock, or... well, pretty much any heavy music, you should be able to get down with this.  Check it out.
~ Gabriel