Snakes In The Machinery... 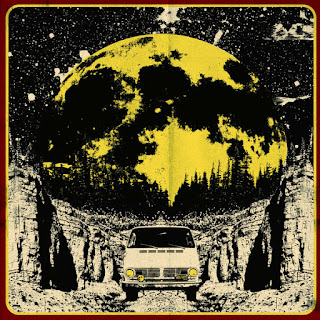 H42 Records and Ripple Music have teamed up again to release and distribute this split 7" to the world.  While both labels have handled groups from a variety of nations, the team-up this time is of a pair of American bands.
On the A-side, Mos Generator do a two-parter, and "Gamma/Hydra" is a tasty heavy rock groover.  Mellow vocals complement the tone of the guitar, sharp beats and steady rolls from the drums throw in some shake-ups, and the bass strums along without too many cares.  Some neat bridges and build-ups (particularly an extended instrumental break in the second half) add further spice, and the whole thing fits together quite well.
Year of the Cobra take the B-side with a heavier bent to their tune, as "The Siege" pairs slow-rolling bass riffs against peppier drums and vocals which put me in mind of Electric Citizen's more melodic songs.  They make sure to hit some hard beats with the chorus, though, bringing a sweet contrast to life as a result.
The two bands are touring through the USA, from June 17th to July 8th, so check their sites for dates and locations and catch a show if you can.  There's also four version of this split to be had, with H42's exclusive grey, Ripple's white, the tour-only gold, and standard black.  Check it out if you've been looking for some new heavy rock to keep your speakers blasting.
~ Gabriel