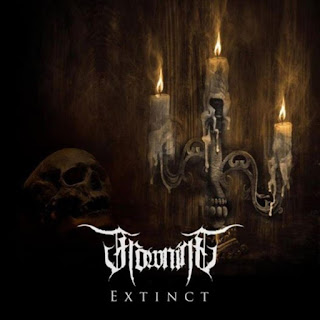 Crushing depression and loneliness?  Frowning's got you covered.  Extinct is the latest offering from Val Atra Niteris, the German brain behind Frowning, and it is a plodding, lumbering beast of an album, heavy with atmosphere and foreboding.
Val says of the first track, "'Nocturnal Void' is musically inspired by Worship, lyric is taken from Edgar Allan Poe's 'Spirits Of The Dead', it features guest vocal from Stanislav Govorukha of Suffer Yourself. The idea was to create the atmosphere of a cold, mystical night, and I think I succeed."  And succeed he does.  High notes peal over low growls and ponderous guitars, all at the pace of a desperate crawl.  With a tempo this low, one can't help but make predictions about what comes next, and every time I expected the music to make a depressive turn, it surprised with something slightly more sinister.  It works for the entirety of the album, as cold whispers and lonesome guitars break up these musical monoliths, emboldening and giving context to the ever-present droning.
"Buried Deep" opens with dirge-ish organs and ethereal synth vocals, a stark but not unwelcome change from what's come before.  The vocals in this track remind me of Wolves in the Throne Room's Celestite, minus its prog leanings, and they lend the music a haunting aspect.
The organs make a return appearance along with tolling bells and the sound of falling rain for the closer, a cover of Chopin's "Marche Funèbre".  Appropriate?  Yes.  Too on-the-nose?  Perhaps.  Even so, I can't say I didn't enjoy the hell out of it.  It goes on for perhaps a couple minutes too long, but given the pace of the rest of the album, one should expect the final track of Extinct to take its time.
If you're familiar with funeral doom then there aren't a lot of surprises here, but overall this is a very solid release.
~ Chris