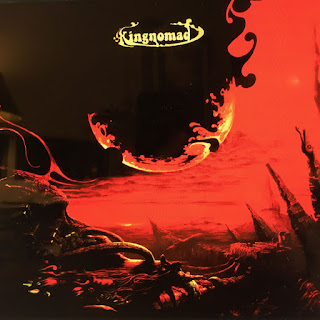 'Swedish psychedelic doom' is a phrase that's pretty reliable for piquing my interest, so when the promo notice for Kingnomad arrived bearing that affiliation, I was geared up to have a good time. And while I was thinking they'd be delivering the psych doom in metal form, the heavy rock I got instead proved just as enjoyable as I'd hoped, with the '70s influences channeled to strong effect without sinking the band into uninventive homage.
There's a bit of a Ghost dynamic to the vocals, but punched up to a less glam/poppy shape, while the guitar swaddles itself in fuzz and the drums work sustained grooves more than sharp snaps. Bass is abundant, naturally, but the band shows restraint with its wielding, preferring to build the harmonies and then use bass for embellishment, rather than setting it as the cornerstone for everything. I was also happy to hear some obscure vocal samples, usually in an occult vein, adding further flavor to the tracks, which bear titles linking the content to Lovecraft, Christianity, and general wizardry for a good-humored melange of doom sauces.
So if you've been wanting something that's heavy and heady, but also shows the band behind it clearly having a good time while playing their tunes, check out this debut album. Ripple Music are handling the release, which is happening today, so hit them up to snag a copy if the sounds appeal to your musical tastes.
~ Gabriel