Fire In The Altar... 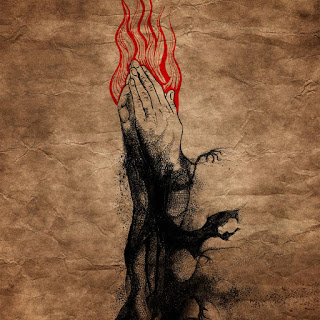 Hailing from Christchurch, New Zealand, Stone Angels bring a brand of slow, steady, old-school sludge with a hint of progress, but never taking a hit in intensity.  Upon purchase, the record is available in three tracks or one long, continuous 20:54 piece.  A nice touch.
“White Light, White Noise II” opens as an intro with a hail to Lucifer and a set of atmospheric echo from deep within a cavern.  Slow and steady, Stone Angels trudge along as another set of double-tracked guitar rolls in, giving off hints of post-rock without sacrificing intensity.  Stand-out track “Signed in Blood” takes a darker tone as we're brought back into the howling cavern that follows the album through its entirety.  Delicious C-tuned string bends abound throughout the intro, leading into a heavy deluge of great vocal work, heavy on that old school sludge echo.  Anybody longing for the days of '98-2004-era sludge is going to eat this up!
Rolling right into “For The Glory Of None”, hail Lucifer and we’re dropped right into our heaviest track yet.  Heavy blasts on the ride with a heavy low end as guitars octave above the top of the track, dropping us right back into that blast.  The production throughout the entire record is top-notch, giving it that sound of something that walked out of 2004, but this can really be heard on the starts and stops of “For The Glory Of None”.  Great, dark, heavy, old-school sludge here.
~ Dan