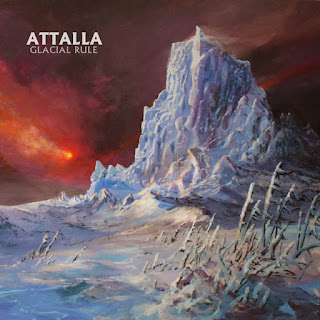 It's been a long time coming, three years to be exact, but the Wisconsin doom quartet Attalla finally return with one beast of an album.
Right out of the gate you can hear how the guys have progressed. Still managing to retain all the fuzz and thumping of their debut, Glacial Rule adds a slightly more polished groove and fidelity to the whole affair. A little counter intuitive for a doom metal outfit you may think, and in many cases you'd be right. It's proven to be the undoing of many a sludge/doom band over the years, but Attalla have manage to add themselves to the ranks of the luck few that have managed to hit right middle of that sweet spot that lies just between all out sludgy fuzz and down right over produced. Think of it this way; where the first album saw the band angrily playing in a darkened graveyard, Glacial Rules sees them playing sombrely on the aftermath of a Viking battle ground. Sorry, but this was the first analogy that came into my head after listening to both albums back to back, and I just couldn't shake it. It's got something of that Nordic grandeur to it that I can't quite put my finger on. Don't worry, it falls a longship sized way short of sounding anything like Amorphis or Opeth, but there is just a hint of something there. Or maybe it's just Adam Burke's fantastic artwork planting seeds of Valhalla in my mind. Either way, it bloody works, and who's to argue with that?
With all but one track (Devil's Lake) well exceeding the six minute mark, the album weighs in a good 12 or so minutes longer that their first outing while boasting the same amount of tracks. This should go some way as to showing the changes the guys have made. Hell, thats a whole EP's worth to most bands... or a few grindcore albums!
All in all a bigger, bolder and ballsy'er return than I expected. Well worth the wait!

For all of you itching for the wax to spin, fear not, the guys have got you covered with two versions ready to pre-order now for the release on 24th March. Head on over to their Bandcamp page and treat yourself!
~ Jay


For Fans Of; With The Dead, Elder, Black Pyramid, Wounded Giant, Wo Fat