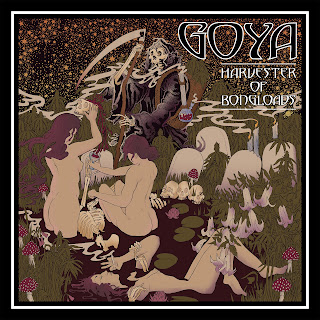 Here at TBB, we've been digging on Goya's releases since the days of their demo, so to say that anticipation has been high for this new album would be a bit of an understatement.  Hearing them grow through their split with Wounded Giant, assorted singles and EPs, and the mammoth concept album of Obelisk (still hungering for a reissue of 777, guys!), I was curious to hear how they'd top previous efforts, and I was not disappointed.
Harvester of Bongloads opens with the three-part, twenty-minute “Omen” (which'll take up the whole A-side on vinyl copies), a shape-changing monster of doom, passing through raging assaults, withdrawn reflections, savory riffs, and flirtations with unhinged outpourings.  Trying to assign too many specifics to it would just be underselling the song, so I've got to resort to simply saying 'hear it on your own, then listen to it again.'  There's a real sense of Goya's song-writing maturation here; while they've capably wrangled big tracks before (go back and listen to “No Place in the Sky” again if it's managed to slip your memory), weaving the moods and sections together as they do here shows them driving to a new level, and imagining what it would be like to hear it played live has my head spinning in overload.
In the second half, “Germination” provides a brief set-up of doom in a more feedback-loaded vein, before “Misanthropy on High” swings in on a sustain transition to snarl and spit its back-broken sense of weight and pain.  It's like hearing sludge's rawest attitude channeled through doom metal arrangements, and the band makes that fusion fucking glow like a black-light poster seen through mushroomed eyes.  The slide into melancholy, almost poignant chording around the two-thirds mark only adds to the feeling that Goya are pushing themselves past the point of familiar comforts in crafting their songs, and if I ever wore a hat, it'd be snapped right off to them for that work.
With “Disease”, the last track of the album, they spin those efforts into some of the album's meanest-sounding material, embracing the sludge-via-doom dynamic in all its violent grandeur, and churning to its disintegrating finish with loads of style.   It's one Hell of an album, in short, with Goya utterly rejecting the impulse to rehash old territory that claims and drags down so many promising doom bands.  Their stars are burning bright and hot, and if doom that doesn't play it safe intrigues you, you need to get yourself a copy of this as soon as possible (official release date's March 3rd, so mark your calendar!).
~ Gabriel