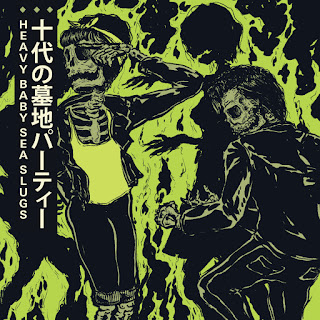 Texas’ own Heavy Baby Sea Slugs offer a Japan / Taiwan tour EP, blending parts A.N.S. with parts Sabertooth Zombie as these guys do the hardcore-with-heavy-sludge-breakdowns thing right. Clocking in at just over sixteen minutes, Heavy Baby Sea Slugs bring the ruckus, starting out with a track titled “King Midas of Shit”, a fast-moving slide-guitar-fueled slice of hardcore with one of the best breakdowns this side of the Human Performance series of 7”s. Eponymous track “Teenage Graveyard Party” starts with a shambling, slow-spinning, smoked-out riff giving a taste of what’s to come later, before dropping out in a quick hardcore spurt.
“Pit Bait” brings the twists opening up as an In Defense-sounding circle pit anthem before dropping into darker territory sounding like black metal, and finally moving onto and expanding the sludgier grounds the Baby Sea Slugs are capable of. Finally, magnum opus “Zero-One” starts out HEAVY, harkening back to some of the early days of Boris and shambling along as heavy as possible before being swallowed up in a pit of feedback. Great stuff!
~ Dan