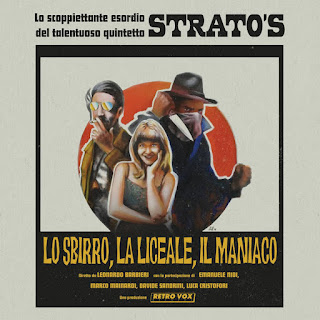 Now here's a cool concept for an album. Recognizing how much awesome music was made for the '70s films of their home country, the Italian quintet of Strato's decided to make three tracks each for some of the biggest genres of that time.
First up is the “Lo Sbirro” trio, covering the style of poliziottesco, which can be roughly thought of as police-focused action/drama films. Hard-driving bass kicks, sharp piano accents, gnarly guitar, jazzy drums, and saucy keyboard come together in a brassy assault of funky rock that fires deep grooves and intricate twists into fantastic form, bringing the energy of the associated films with an undercurrent of their violence.
The second trilogy, “La Liceale”, handles sexy comedies, sounding both sultry and sweet with the mellower arrangements of the first track in this section, “Aperitivio”. The keyboardist, again, does a fantastic job emulating the sounds that inspired the project while bringing more than a few breaths of fresh life to the playing. As that's happening, the rest of the band is getting their groove on, something they get to pick up to wilder, summer-vibe heights with the following track, “Un Goffo Pretendente”, and send into lusty mod jazz territory with “Rossella” after that.
And lastly, “Il Maniaco” digs into the giallo/thriller vein. While there's a few big nods to Goblin, Strato's take things in much more of a melting pot direction, combining influences from a wide stretch of composers and films. For instance, there's the tense guitar-string tapping towards the start of “Delirio Paranoide” leading into a keyboard-charged bridge, back through the tapping, and on into sharp stabs from the keyboard, amped up to near-screaming power. Think murder mysteries, cannibal movies, slashers, invincible monster-men horror; if it was scary or gory, had great music, and came out of Italy in the '70s, you can probably find some tip of the hat to it in this section.
Taken all together, it shows amazing range, skill, style, and song-writing technique from this group. Even without the framework given by the movie homages, it's a great set of songs, but with that context in the mix, it makes for a fantastic concept album that meets and exceeds the ambition of that initial idea. Strato's deserve big recognition for what they've put together here, and even more so for this being their first album. I can't wait to hear what else they'll create, and to get my mitts on a physical copy of this LP.
~ Gabriel