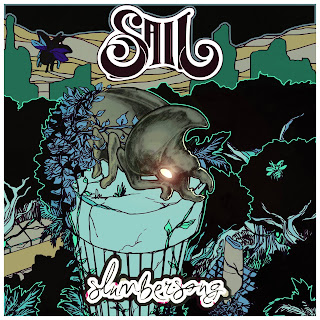 The band formerly known as Husk delivers their first album Slumbersong under their new moniker, Sail.  These four young men combine post-rock, sludge, and progressive metal in a way that feels energetic without being frantic, while exploring an emotional diversity not often seen in those genres.
Sail has a lot of tricks in their bag: sludgy chugs, catchy melodies, progressive noodling, all the way down to squealing high notes like the closer of a hair metal jam.  While the dominant sound of Slumbersong is sludgy riffing alongside throaty clean vocals and cymbal-heavy drumming that will sound familiar to fans of bands like Baroness and The Ocean, there are moments that set Sail apart as distinct from those genre behemoths: songs that could genuinely, shockingly be described as ballads, and occasional major chords that counter-balance the baseline aggression of the greater whole.  It's a well paced album.  Tracks like "Shimmer" and "Ghosts" lower the tempo and resonate with hopeful yearning, a massive change of pace and tone from the energy of the rest of the work.  The clean vocals on these tracks and others are the weakest player here—they overreach and sometimes take the singer out of his natural range, leading to some unfortunate off-key moments.
Slumbersong is a bit of a paradox.  In some ways, it feels less like an album with one thing to say than a method of showcasing the band's breadth of songwriting.  But on the other hand, the songs are stitched together in a way that makes the whole engaging as a singular experience.  While the strained vocals hold this album back from greatness, it's an eclectic offering from a band looking for a fresh start.
~ Chris

For Fans Of; Baroness, Torche, Mastodon, The Ocean

Sail - The Weight of Gold