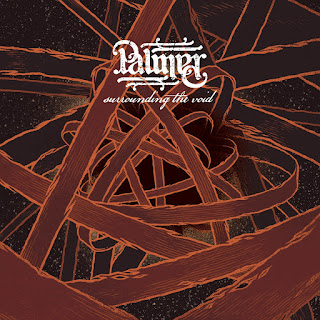 Swiss band Palmer come to us with their third release Surrounding the Void, a swaying, emotive growler.  Twinkling chords, noodling guitars, and reverb-heavy atmospherics find themselves paired with sludgy riffs and strident vocals as Palmer deftly weave through both light and dark territories with equal parts skill and passion.
The album opens with a snarl of downtuned guitars and heavy drumwork, with occasional dissonant chords disturbing the flow, spiking the riffs with just a dash of pique.  The second track, "Misery", takes things in a decidedly more affecting direction, redirecting the initial angry energy toward the mournful.  Another twist comes in "Artein"'s soft, downplayed moodiness, featuring clean reverb and driving snares.  This is Surrounding the Void's M.O.: overwhelm with heavy, solid songs, then relax and lift with atmosphere.  The two modes play well off each other—the heavy songs will please any fan of sludge while being nicely melodic, and the atmospheric interludes lend texture to an eminently approachable album.  Fear not, the heaviness is emotive without being saccharine.  Everything in its place.
Every note, every chord, every scream feels distinct and intentionally placed, at odds with Palmer's self-ascribed 'Swiss jazz' influences.  My lack of familiarity with Swiss jazz may be showing here, but these structured songs do not evoke the improvisation that I typically associate with jazz.  If you squint really hard you can hear some of the jazz influences, primarily in the more free form songwriting of the middle portion of the album contrasted by the very tightly structured front and back ("Digital Individual" in particular features some jazz-like solo work) but by and large this is a post-metal release with clear nods to Isis and fellow Swiss group Knut.  Solid on all fronts, Surrounding the Void is not to be missed.
~ Chris

For Fans Of; Cult of Luna, Knut, Neurosis, Isis, The Atlas Moth