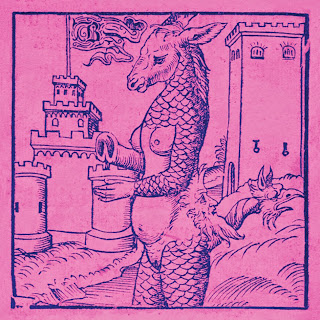 The down-cast and mossy settings of Brume's first full album are evident as soon as you look at the track titles, the five of which run in order as "Shadows", "Win", "Help Me", "Even If Love", and "Mother Earth"; once you hit play, that moodiness manifests itself with full strength as the bass rumbles and a clear but obscured voice rises from the morass of low-end sounds.  Slow-moving but sharp-edged grooves put the muscle of the songs in action, sliding past so smoothly that before you know it, another 6 minutes or so has slipped by on well-oiled tunage.  There's a similar sense of that monolithic-but-psychedelic style Windhand moved away from with their second album, though Brume give it their own personal touches, such as being more free-handed with the energy.
Given how slabby each of the songs is, it's hard to go into more detail without just picking away at the ways in which they channel the tones, or going on a point-by-point analysis of how they bend the mood each time.  Suffice it to say, it's an album that comes in, does its thing extremely well, and leaves you with a sense of satisfaction and an urge to hear it again.  While I'm personally really hoping that this makes it to vinyl at some point, you can pick up a copy on CD from what's left of When Planets Collide's 100-copy run, at least at the time of this review's writing.
~ Gabriel

For Fans Of;    Psychedelic Witchcraft, Windhand, Jess and the Ancient Ones, Major Kong, Acid King