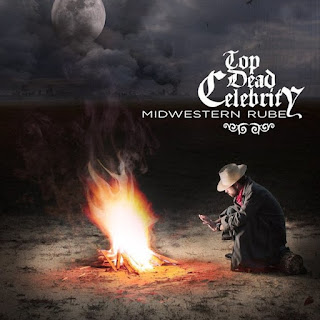 If you read my post back on Jan 30th, I must now confess I may have jumped the gun a little with my prediction that not much else would really compete for my favourite album of 2011. Evidently I neglected to consider one of my favourite bands of recent years, Top Dead Celebrity...
Now, I first caught this awesome little Utah 4 piece on a great weekly podcast called The Mediocre Show many, many moons ago. They gave the show their theme tune, which when you hear it you'll understand exactly why I became instantly hooked. Needless to say I quickly scoured the interwebs and tracked down their first, self titled album and to this day it still remains the best thing Ive ever downloaded on iTunes. Screaming gritty vocals, awesome chugging riffs and samples taken from Big Trouble In Little China... Exactly, how could I not bloody love it?!
I also went to the trouble of getting in touch with their bearded lead guy, Jeff who was kind enough to keep in contact and send me some of the newly recorded album...

The opening track The Mule, winds up with a short, eerie ambient feedback before bursting straight out of the box with a thunderous riff and drums like a freight train hurtling towards you. To say it perfectly captures the entire feel of the album would be an understatement. Even with the slower tracks such as Black Bloody Water and Black Rider, nothing lets up for a second. The slow churning guitars effortlessly compliment the same growling vocals and form huge waves of epic riffs and choruses that still manage to keep your feet tapping and air drums pounding. The whole recording moves seamlessly through a variety of styles and speeds. With tracks like Welcome Aboard and Saint of Killers echoing an awesome display of pure metal and Karma to Burn style guitars. Then tracks like Midwestern Rube and Burn it Down offering a slight punk like feel and speed, even sounding a bit (at least to me) reminiscent of Suicidal Tendencies. I swear, if these guys don't get your head banging and feet tapping you must be bloody soulless!.
All in all, there genuinely isn't a single song on this album that I can fault. Its abundantly clear a whole lot of time and effort has gone into putting this recording together. Its perfectly mixed without being overly produced and loosing touch with the true feel of the band and their music. Something which seems to be done far too often these days.

Anyway, enough talk, go find out for yourself! Shoot over to their myspace to check out some other offerings, check out their merch and for god sake head over to iTunes and pick up the first album and support an awesome band. Dont forget to check back over March for the full length new album. I'll bet my bollocks to a barn dance you wont regret it.
But because I spoil you, hit up the link below for a few tracks off the forthcoming album... You lucky sods.


For fans of; Orange Goblin, Wo Fat, Truckfighters, Dukes of Nothing, Red Fang