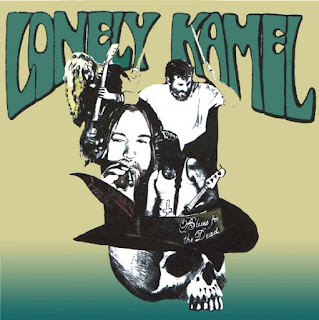 I must confess, I very nearly did judge a book by its cover on this one. Yeah, I should  really know better... The cover may look like it was knocked up in 5 minutes using round ended scissors and MS Paint, but that's definitely not a reflection of what awaits inside.
So while waiting for the download I zipped over to their myspace and did a little snooping. Their bio states they hail from Oslo, Norway and are heavily influenced by 70's heavy rock. So off to great start in my book...
Right from the opening bars of Tale Of A Mad Man you can tell they werent lying. Slow fuzzy guitars scream an early Deep Purple influence. But it doesn't stop there, as the album progresses you catch little hints and twinges of other classic rock muses like Uriah Heep and Captain Beyond. The pinnacle of which is at the beginning of the track No More Excuses, when in true early 70's style, a synth organ sound is broken out to supply the intro. But fret not, this doesn't take away from the record still sounding firmly routed in the modern day. Every song still echos of the likes of todays acts such as Sungrazer and Samsara Blues Experiment. That iconic slow, trippy psychedelic wave. Or 'pure weed smoking music' as a friend of mine likes to refer to it.
Its great album and their second one at that, so I will definitely have to do some catching up at have a good listen to their first record.


Currently out on Transubstans Records, unfortunately not pressed on wax.

For Fans Of; Uriah Heep, Captain Beyond, Causa Sui, The Dust Bowl, Valley Of The Sun