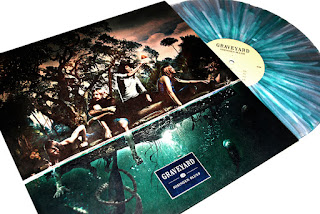 This ones brand spanking new, in fact I believe the release date is today. However, I got my grubby little mitts on this limited edition early. Damn, I spoil you lot!
From the chilly wilderness that is Sweden, I give you Graveyard. Four piece stoner/psychedelic/classic rock bearded outfit. Hisingen Blues being the follow up to their great 2008 self titled first release. So for 3 years away you'd hope that something special would have been brewing right? Well thankfully that certainly seems to have been the case. Now at this point I must confess that although I did like the first album, it didn't really wow me. It was well put together and produced but it just seemed to have lacked a certain something, for me at least. Nether the less, the guys have dug deep and put together this cracking piece of work. Keeping within a simular tone as the first album but with an all round more polished sound and depth. If you compare the two albums its immediately apparent that that band have grown and have truly found their style. Very Led Zeppelin esque, with slow build ups and precision guitars all with a bluesy undertone and ambient feel.
I urge you all to check these guys out and if like me you're still wanting your tunes on wax then shoot over to Nuclear Blast and you may be able to pick up lovely this limited edition  blue/white splatter vinyl, if not its also available on clear wax and for all y'all who reside on the other side of the pond, well you're getting you're own clear blue pressing soon.