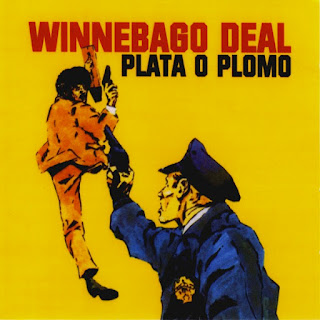 Im kicking myself that its taken me nigh on 5 months to get these guys on here. I've got all their stuff, regularly wear one of their shirt and theres even a huge poster of theirs hung above my TV. I've really had no excuse... Shame on me!
Anywho. I first caught this epic duo playing in a dingy little club in my home town. The gig was free, pretty empty and they'd not long been together but from walking in mid song I'd have sworn they'd been at it for years. Frantic drumming and furious guitars coupled with a screaming guy in a Black Flag shirt. I stood at the back with a beer in awe. Once the set was finished I spent the rest of the night chatting and drinking with them. Not too long after I went to see them again, this time in their home town of Oxford and following the show I managed to wangle a shirt and demo cd. It wasn't long after that this, their first release hit the shelves, albeit not to the roaring acclaim I think it deserves.
A perfect mix of punk and good ol' hard rock. Basically its all the punk ferocity but with classic catchy riffs and gritty vocals.
Im glad to say the guys have gone from strength to strength. Touring the world and rubbing shoulders with the likes of Brant Bjork, Nebula, High on Fire, Queens of the Stone Age and Motorhead. They've even been joined on stage with Nick Olivari.
You've gotta check these guys out, duo's don't get much more awesome than this.