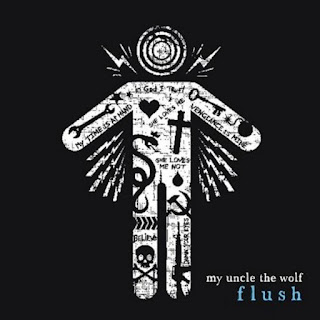 Strangely the first I heard about this band was from Jimmy Bower himself. Following an Eyehategod gig last year I got chatting to the man over a beer and he told me to check them out. So heeding his advice I scoured out their first self titled album and gave it a listen. I must confess that at first listen nothing initially 'wowed' me, but the more I listened to it the more it grew on me. Awesomely heavy with a really nice mix of huge riffs and mellow ambient jams, it seemed almost unorthodox for Jimmy to be associated with it, given his past projects and ventures. Nonetheless it was a great recommendation and a great debut album.
Now two years down the line, the guys give us this, their second full length release Flush. Two years may seem like quite a gap, but rest assured they haven't been slacking off. With their first EP coming out last year and this new record totalling 14 tracks, its clear they've been focusing on new material. So what should you expect, same old thing as last time? Well, yes and no. Where some bands often try to progress by cleaning up their sound these fellas have sort of gone in the opposite direction, but don't worry, thats certainly not a bad thing. Just this time round theres more fuzz... A whole lot more fuzz. Everything comes over way more darker, distorted and even slightly creepy. A bit more metal orientated than before, all the thumping build ups and crushing riffs are still there in the bucket load so fear not. If you enjoyed their first offering and would like something a little more sludgy and gritty but equally heavy I cant recommend this album enough.
~ Jay
For Fans Of; Stonebride, Helmet, Monobrow, Solace, The Sign Of The Southern Cross
Website • Myspace
Flush (320kbps)