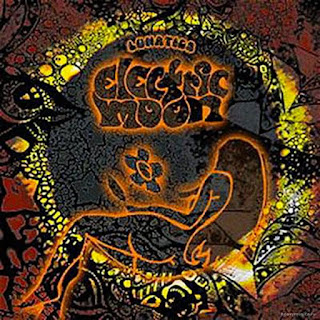 Lets face it, the Germans are damn great at, well... pretty much everything really. Granted they have a pretty unorthodox fascination with David Hasstlehoff, but when it comes to cars, football, audio equipment and most importantly good old psychedelic/prog rock they're pretty hard to beat. But this is just common knowledge right? So when they produce a band that comes up with an album composed of 10 min+ tracks of trippy spaced out jams you're standards are naturally going to be pretty high. Well, not being one to disappoint you, here's Electric Moon.
Now despite not being around for all that long the band almost instantly made a bit of a name for themselves. This being their first full studio album from last year. But for those of you who missed out,I'll bring you up to speed... Think - epic space rock ballads akin to the best bits of early Pink Floyd, a touch of 60's esque composition complete with organ and the occasional dulcet tones of hypnotic vocals. Thats really Electric Moon in a nutshell.
I cant help but feel if there was to be a remake of Live at Pompeii, I honestly couldn't think of a single other band suited to pull it off. From beginning to end the album is as trippy as trippy comes. Everything about it is eerie and haunting, wether its the slow distant guitars or the whispering echoed vocals that blow across each track like wind in the trees. Its all done with pin point precision and timing, much like Red Sparowes but an much more impressive feat given they have half the amount of members and only been around for I think just over a year. These guys are a Pink Floyd for a new generation, modern day stoner prog rock at its very best.
So if you're looking for some chilled out psychedelic ballads head over to Sulatron Records and pick up this album. While you're there, I strongly suggest you also treat yourself to the latest release Lunatics Revenge which is equally epic. But worry not, if you're a vinyl junkie like me an prefer your tunes on wax Nasoni Records have pressed 500 copies - 400 on black and 100 on purple marble. Unfortunately the latter being sold out. Much to my bitter disappointment.