How About A Brazilian?... 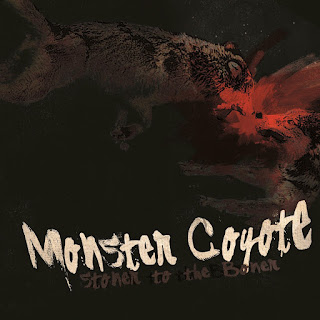 Finally! A cracking stoner outfit from Brazil. Now this is something I've been waiting on for a while.
Ok, Stoner to the Boner is short – just over 20 minutes in fact, but what it lacks in time, it more than makes up for with furious vocals and endless grooves and riffs, culminating in a truly balls-out, stoner-metal experience from the Brazilian trio.
The album itself starts out with the mellowed ‘When I Cross The River’, but quickly kicks in to the highly riff-orientated ‘Troublemaker’. However, you get the feeling with this album that everything is building up to the pinnacle - ‘Devilroad’ – an upbeat, aggressive effort which feel like it’s solely intended to be played whilst going 100mph down a highway.
There are only seven songs on the album, which isn’t necessarily a bad thing for the style that Monster Coyote utilize. They subsequently do a good job of not sounding repetitive, whilst still keeping the similar sound that you can really immerse yourself in. It may not be groundbreaking stuff, but it simply doesn’t claim to be.
It’s loud. It’s frenetic. It’s aggressive. It’s fun. Oh, and the album title speaks for itself.