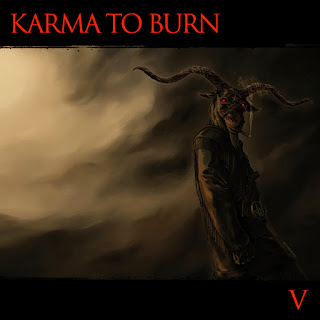 Thats right, Karma To Burn are back... It was a pleasant surprise for me too. Given that last years release  Appalachian Incantation kind of went under a lot of people's radars. Although that being said, despite being a great return by the guys it didn't seem to be quite on par with the bands earlier work. Not to take anything away from the album, but following Almost Heathen then a 7 year hiatus I think hopes may have been a little too high. None the less here's album number 5... 5 instrumental tracks, 2 songs and a Black Sabbath cover.
Those instrumental roots are still well and truly there. They may not be quite at the same pace and fury as those found on Wild, Wonderful Purgatory but they have all re-found that certain punch that was so consistent on the first 3 albums. Even the tracks with vocals have that certain something thats kicked them up a gear despite being a widely different sound to their usual lyric driven songs. The whole album in fact has seemed to have taken off in a slightly different direction to all the previous works. Only very subtly though. Mildly less fuzzy and a little more polished is the most accurate way to describe it. Everything is well paced and its clear the guys haven't lost the ability to write a hell of a riff or two. If you're looking to be whisked back to the early 2000's here you're not going to find it. But take the album as what it is - a progression, and you definitely wont be left unsatisfied.
Once again Napalm Records have pressed a limited number of the album on a choice of purple or red wax. Head on over and order yours now. I have!
The guys are also doing the rounds in Europe over the next few months, hitting pretty much every festival in sight, so you've really got no excuse to go and see them if they're in a town near you.