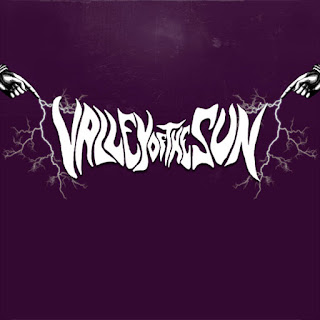 Right, it may look like I'm late for the party with this one, but this isn't just another review, its a request for help... and you lot only have until the 25th of May to act! Hence why I've put it up prematurely.
The fella's from Valley Of The Sun have been busy as sin in the recording studio laying down the new EP. Luckily for me, they've been kind enough to throw a preview my way and good god its an absolute screamer! But I will get to that in a minute. Right now, the chaps are trying to raise enough funds to get the new release pressed on vinyl. A worthy cause if ever I heard one! Now you lovely people out there have a few choices... $5 - $11 donation will get you a free download of one of the new songs plus a limited edition sticker. $12 - $24 and you will get the afore mentioned plus the vinyl itself. $25 - $34 will get you that lot plus a limited shirt, and $35+ will land you everything plus a limited screen print of the bands very first gig poster. If you're willing to part with more than $35 theres some awesome opportunities to be had. You'd have to be dumb as sin to pass this up! But need more convincing? Well shoot your ass over to their Myspace and have an exclusive listen to track 2 off the new EP, Deep-Light-Burns and prepare to have your socks well and truly knocked off.
I really cant stress how awesome the new EP is. Ive had it on repeat constantly for the last hour. Right out the gates its oozes more groove than you can shake a stick at. The opening track Hearts Aflame tears forth with some outstanding ferocity that doesn't let up for the entire 6 mins. Everything sounds so tight and the production is second to none. Where as the 2010 EP was a fantastic first outing, the guys have seriously upped the ante on this one. The storming desert rock style riffage backs some cracking vocals which echo of early Eddie Vedder. Everyone's worked their nuts off writing and recording  this one and it really shine through. I only have one gripe with this band... They're too goddamn far away for me to catch live!
So guys, please help out an awesome band and get something epic in return. They were good enough to release their brilliant 2010 EP totally free of charge so c'mon, show some love. Speaking of which, while you're waiting for the new material to be officially released go download their first offering and get a taste of whats to come. If you haven't already that is.